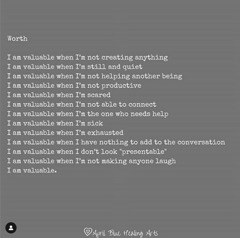 This past week, I came across an affirmation-like poem on social media. It was entitled “Worth” and the source was listed as “April Blue Healing Arts.” The affirmation was posted by Maggie Jones, MA, a life coach from Lawrence, Kansas who has an active online presence.

Now, this affirmation was shared in the midst of the global pandemic we find ourselves in, during the Spring of 2020. Many people are struggling. Most of the audience of this post I assume are millennials, who are known to have extremely high levels of anxiety compared to other generations, and many of which work in the gig economy or service industry, which has been devastated by the stay-at-home orders during this pandemic.

I was really stuck by the commenter, who couldn’t grasp, couldn’t understand the concept of human value outside of or independent of production.

This commenter is operating under the dominant worldview of our time and place, 2020 USA; which I will term Industrial Corporate Capitalism.

This worldview tells us that our value as humans is determined by what we can produce. How we are able to monetize our labor or skills or image is our value.

The more we produce, the greater our worth.
The less we produce, we are viewed in a “less than” fashion.

I always found it somewhat strange, sacrilegious really, that corporations have these departments called “HR.” HR stands for “Human Resources.” The corporation’s goal is to utilize (or exploit) natural resources and human resources to maximize profits/sales/growth. The department that has responsibility for employees is entitled “Human Resources” it always seemed objectifying and dehumanizing to me.

So under this worldview, billionaires are the heroes, the exemplars of value”

Today, everywhere I turn, the media is clamoring to interview another billionaire to hear their opinion or their take on the issues of the day….usually in fields they have no experience in or only a hobbyist’s interest…but…they are billionaires, exemplars of value in industrial corporate capitalism, so their opinions matter-in-all-things. They are deserving of primetime promotion and unbelievably, direct input into government policy! Many of these billionaires think they are qualified to be President or Congressman because they are billionaires, exemplars of valuable.

Furthermore, this is the worldview that explains the Lt. Governor of Texas, Dan Patrick, sharing his opinion on the health of the economy vs. the health of senior citizens in this time of stay-at-home orders on Fox News on March 23rd, 2020.
“No one reached out to me and said, ‘As a senior citizen, are you willing to take a chance on your survival, in exchange for keeping the America that all America loves for your children and grandchildren?…And if that’s the exchange, I’m all in.”

This worldview explains our current governments response to this pandemic as we read each day about the millions of dollars of assistance that went to large corporations and nothing or a pittance that went to individuals or small businesses.

This is the dominant worldview/ideology that we are living in.

In the book of Genesis, it is written that human were created in the image and likeness of God. Ancient and medieval Christian scholars writing in Latin came to call this Imago Dei theology; Image of God theology. So what does this mean? Well, like everything else in the bible, everyone has an opinion and everyone thinks their interpretation is correct, each faith tradition has a unique take on it.

I read it that we are all God’s Children,
each of us is unique and special,
each of us has a spark of the divine in us,
God’s breath is in us.

Our Universalist ancestors in the early 20th century stated it as a belief in “the supreme worth of every human personality.”

Belief in “the supreme worth of every human personality.”

When the Universalist denomination merged with the Unitarian denomination in 1961, it was enshrined in the UUA’s First Principle “We affirm and promote: the inherent worth and dignity of every person.”

“‘Just to be is a blessing. Just to live is holy.”

Unitarian Universalists affirm the inherent worth and dignity of each person as a given of faith—an unshakeable conviction calling us to self-respect and respect for others.,” —Rev. Dr. Rebecca Ann Parker, minister, theologian,

Now, we live in a world with various human-created labels that are affixed to us by the larger society.

These -isms and the many others, tell us very clearly who is normal and who is “less than.”

You have inherent worth.

Inherent worth is “worth beyond” or “worth before…the -isms”

The dominant worldviews of our time and place aren’t true, they are lies; and yet, they are dominant and empowered.

“The Beauty of Individual Differences”

He had a humanistic philosophy undergirding his artistic work, which he termed
“The Beauty of Individual Differences.”

From what I have gathered, from reading about it and talking with John, he meant by this, is that we each have a spark of specialness, uniqueness. John would work for months/years to finish a sculpture. He would work for so long with the models, creating again and again and again pieces in clay as the model posed. He was attempting to get at the person’s essence, their unique human spirit, before realizing it and finally casting it in bronze. This is how he stated it himself.

To be able to do something better than anyone else has moved man to many irrational acts. The gift of art can be a realization of the unique nature of the self and a mature establishment of directions, not goals. Thus the concept of ‘better’ is replaced with a more realistic one dealing with the uniqueness of contribution.
– John Henry Waddell

Unique of contribution. Beauty of Individual differences.
In this conception, there isn’t a value system of human worth: better than, or less than.
Everyone has value. Everyone is unique.


“The Life and Teachings of Jesus of Nazareth in the Gospels”

A core teaching of Jesus of Nazareth in the Gospels is a lifting up of individual human value in opposition to the dominant theology of empire of his time in Roman occupied Judea.

Ask yourself: Who did Jesus spend his time with?

Tax Collectors – who were views as sell-outs, traitors. Tax Collectors were Jews who collected taxes from fellow Jews to give to the occupying Romans.
Sex Workers – who were frowned upon by the patriarchal society of the day
Various Follower/Disciples – often poor, quit their jobs to live an itinerant homeless lifestyle on the road.

What were the moral of the stories Jesus told, what we call the parables?

Well, in the parable of the Good Samaritan, the audience of his time looked down upon Samaritans. The story shows how caring and loving someone from a despised people can be. They have worth, even though you despise them.

Relevant to our time in Trump’s America, this story could be “the Good Iranian” or better yet “the Good Undocumented Immigrant” those who are maligned and despised.

Then there is the story of the Prodigal Son. A son of a landowner gets an inheritance, and goes off and wastes it boozing and gambling and womanizing. He is deeply ashamed and embarrassed and returns to his father. His father is so overjoyed to see his prodigal son, he throws him a big party of celebration. The brother gets jealous, why are you rewarding his misbehavior?
My son was lost and now he is found.
The son has value, independent of his poor decisions.
The son has inherent worth.

To sum up this deep human value, I will turn to Thomas Merton, who was a gifted Roman Catholic monk writing in the 1950s and 1960s before his untimely death. He stated it quite clearly and succinctly.

Our job is to love others without stopping to inquire whether or not they are worthy.
That is not our business and, in fact, it is nobody’s business.
What we are asked to do is to love, and this love itself will render both ourselves and our neighbors worthy.
– Thomas Merton
———

Which brings us back to the social media affirmation on “Worth”

I was heartened to see this affirmation posted on “Worth;”
Saddened to see the comment by the young woman, so immersed in a worldview that diminishes her inherent human worth that she “can’t really process it.”
Even when we are gifted with life-affirming worldviews by our family and artistic and religious ancestors; life is still a struggle. Especially in these difficult times, especially when our societies dominant worldview is so de-humanizing.

May we be reminded:
You are enough.
You are worthy.
You are valuable; even if you are still in your pajamas and your hair is all over the place.
You are beautiful, just as you are.
You are whole.
Let your light shine.
God Bless you.
Peace be with you.

Conversations with the Sacred
A Collection of Prayers

Buy it now at